What does the fox say? Something pungent! 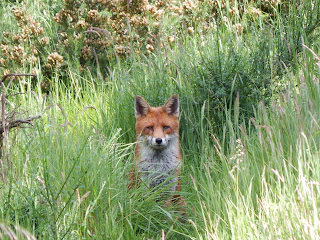 I have been taking more of an interest in red foxes (Vulpes vulpes) of late having seen by far many more foxes in and around Aberdeen in the last 3-4 years than I can remember seeing in all of my life before. Whether this reflects an actual change in urban numbers or fox behaviour (or perhaps my own behaviour) I do not know.

The red fox is native across Europe, Asia and North America ranging between arctic and near desert habitats and is found in lowland and upland areas across the UK.

Fox earths (fox dens) are often described as being taller and narrower than badger (Meles meles) entrances. This allows foxes to emerge in a more or less standing posture. They are described as being of 20 to 25 cm diameter with a fan shaped arc of excavated soil from the entrance. Foxes are not as capable at digging as badgers or rabbits (Oryctolagus cuniculus) and will often occupy disused or used badger setts - it is not unusual for both animals to emerge from the same entrance! Foxes also enlarge rabbit holes or make use of spaces under buildings or under trees.

Mistakenly presuming I could use a slightly modified badger sett survey technique to locate earths, I have since established from the Mammals of the British Isles Handbook (4th edition) that the use of earths is very variable. Outside of the breeding season many foxes lie above ground in dense cover but they may use earths during bad weather. Breeding earths are most conspicuous during the period when fox cubs have food brought to them in the earths (food remains may be in the entrance and the earth may smell of fox), or as cubs begin to emerge between May-June and trample down vegetation around entrance(s) through play. Being mid-way through July, I should probably not feel too disheartened not to have found an entrance matching the textbook descriptions.

Secondly, I presumed that as many sightings of adult foxes are of single animals, that they are solitary outside of the breeding season. The dog fox (male) brings food to the vixen (female) and cubs in the earth. I was surprised to also find from the mammal handbook that they are a social animal which live in family groups across a joint territory. A family has a dominant male and dominant female who will breed and may be supported in better conditions by one or more subordinate adults which could be female or male.

Red foxes reputedly use at least 28 categories of sounds though more recent research suggests 12 adult sounds and 8 cub sounds). They use barks, which they would do with a higher pitch than dogs. They are more renowned (or infamous) for 'vixens screams' during the late winter (their mating season) - though it would appear both dog foxes and vixens use screams. Cubs may also be heard making 'gekker' noises during play and similar sounds are made when fighting.

Most of the time you are more likely to smell foxes than hear them - they are notorious for using scent with great effect - both urine and faeces - often marking conspicuous objects such as large stones or tussocks or along pathways (particularly at junctions) where they can be found by other foxes. The scats (faeces) are more often than not the most obvious field sign of fox presence. I do not have a particularly good sense of smell but once I get a wiff of the acrid smell of their scat or urine I find it is difficult to get rid of!

Being omnivores, droppings can contain animal and fruit remains - particularly berries. They eat birds, rabbits and smaller mammals such as voles. In common with other carnivores, faeces are often long and twisted with remains of fur and feathers or insects, or can even be purplish with berries. This contrasts with dog droppings which are not twisted and do not tend to have obvious remains of contents. The droppings start off a dark colour but can go white over time due to the high bone content. 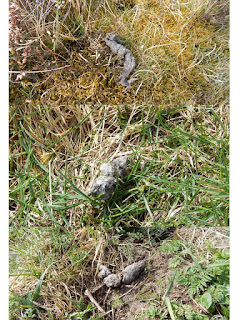 Variability in red fox (Vulpes vulpes) scats - all photographs taken on the same day at the same site: Top - White patches in contents which could be bones of prey or bits of feathers
Middle - Obvious fur content and superficially resembling a bird of prey pellet
Bottom - A more dog like fox scat. Very much whiter due to the high bone content

There is a huge overlap between fox scat forms and those of other carnivores. It is not unknown for professionals to mistake fox scat for something more exotic such as pine marten (Martes martes) or Scottish wildcat (Felis sylvestris grampia) scat - so scats are never the best field sign for identification unless supported by DNA testing.

They may also mark urine over emptied food caches or leave droppings on food remains. 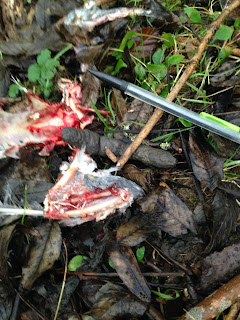 A distinctive feeding sign of foxes is that they shear the feathers off from birds that they eat, tearing them off with their teeth leaving broken or ragged quill tips. Birds of prey also remove feathers from birds but pluck them leaving the quill tips intact. 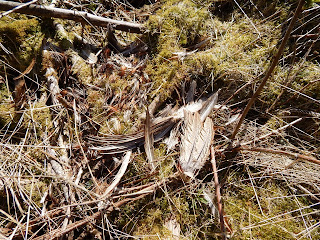 The feathers of a pheasant sheared off by a red fox (Vulpes vulpes), leaving ragged quill tips, Hill of Canterland

Fox hairs may also be caught in barb wire fences, but not having the distinctive nature of badger or deer hairs, I have never yet confidently identified fox hair on its own.

A further sign is foot prints. The clarity of the print can be dependent on the substrate and age of the print. Foxes have a relatively narrow print compared to most types of dogs. You will often hear people talking about drawing a line (or imagining) a line or cross over the print - the lines of which will not touch any pads. The picture below shows an actual fox print (unfortunately I do not have any clear photos of fox prints at the time of writing), with the picture below showing approximately the location and shape of heel pad, toe pads and claws superimposed along with both techniques of drawing lines across the print. It is not possible to use either technique on a dog print without touching/crossing one or more pads. 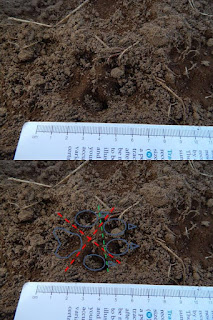 Demonstration of the two techniques of drawing lines between the toe pads and heel pads of red fox (Vulpes vulpes) without any pads touching the line. This is not possible to do with a dog print without a pad touching the line(s)

Country foxes tend to be very shy and secretive, which is hardly surprising given their persecution. Urban foxes can be quite bold. I have encountered a pair of foxes being playful with people - something I saw a few years ago at Aberdeen Pleasure Beach. As charismatic as they are, I would not encourage anyone to entice foxes into becoming more comfortable with approaching people - they can be a nuisance around gardens uprooting garden plants and interfering with bins. I am also sure that anyone with a sense of smell will come to regret closer contact! 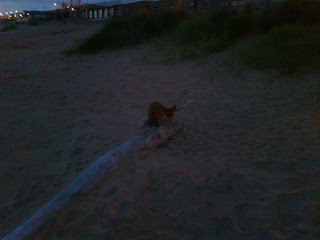 There is an excellent website about foxes - www.thefoxwebsite.org which promotes itself as "the one site with all the answers about foxes". I would thoroughly recommend it to learn more about foxes and to separate fact from fiction - particularly at this time of debate about fox hunting with dogs in England and Wales.